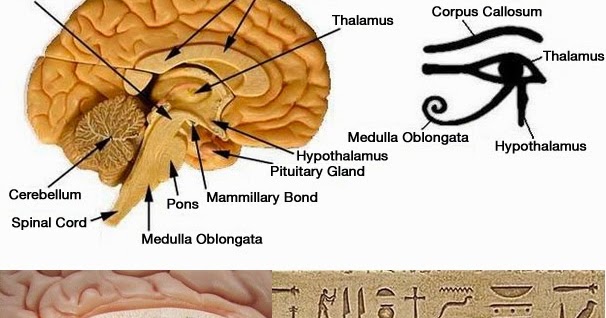 It is believed that everyone has a third eye that allows them to connect with the spiritual world. Has yours been awakened? The New Age community frequently refers to the pineal gland as the intuition organ, or point of connection between the body and spirit. However, the majority of people are unaware that the pineal gland is actually a third eye.

Derived from the root word “pinea”, the pea-sized pineal gland is located at the precise geometric center of the brain. “Pinea” is Latin for “pinecone” and appears as a symbol throughout the ancient world from the Greek, Roman, and Sumerian traditions, to Pope’s staff and the Vatican’s “Court of the Pine Cone.”

The pineal gland is highly regarded in the world of psychics and is said to have spiritual significance. Additionally, the Hindu culture frequently wears bindis to signify the pineal gland’s importance in regards to spiritual wakefulness. That leads to the following question. Why have so many ancient cultures been preoccupied with pineal gland symbolism? It is possible that the answer may be identified when biophysical analysis of the interior of the pineal gland is completed.

According to Dr. Cheryl Craft, PhD, “Under the skin in the skull of a lizard lies a light-responsive “third eye” which is the evolutionary equivalent of the bone-encased, hormone-secreting pineal gland in the human brain. The human pineal is denied access to light directly, but like the lizard’s “third eye,” it shows enhanced release of its hormone, melatonin, during the night. The challenge is to understand the mechanisms which regulate the synthesis and release of melatonin.

Dr, Craft, Chair of the Department of Cell and Neurobiology at the University of Southern California further states, “The pineal gland is the ‘mind’s eye.’ Dissected, the reptile’s pineal looks much like an eye, with the same shape and tissue.”

It is rather interesting to note that the pineal gland contains retinal tissue composed of rods and cones inside its interior, exactly like the eye. In fact, it is even wired into the brain’s visual cortex. Dr. David Klein told Science Daily, “The photoreceptors of the retina strongly resemble the cells of the pineal gland. It even has vitreous fluid in it like the eye does.”

Rene Descartes, French philosopher, highlighted the pineal gland in his research and writings completed in the early 1600s. He referred to it as “the seat of the soul” as well as “The part of the body in which the soul directly exercises its functions.” In his writings, he elaborated on his thoughts regarding the pineal gland and how it was the place we were able to receive our messages from the Divine because it was the center at the which the body and soul connected.

Also, Jesus said in Matthew 6-22 “The light of the body is the eye: if therefore thine eye be single, thy whole body shall be full of light.” This makes it obvious that the concept of there being a spiritual eye is not a new one.

Consider the following. There are numerous individuals who have reported out-of-body experiences. Many of them report the presence of a silver cord linking their astral body to their physical body. This cord is described as being located at the back of the head or between the eyes, where the pineal gland is located.

Is it possible that our astral body, which exists within our physical body but has access to higher dimensions, is able to receive literal information from the spiritual and psychic realms in the form of images and photons? Are they, then, fired down through the silver cord into the visual cortex of the brain allowing the pineal gland to receive this information?

Does the pineal gland act as tiny TV for worlds that cannot be seen by the biological eye? Due to the scientific evidence that the pineal gland can indeed function like an eye, we can now begin to speculate further.

Sadly, the pineal gland can become calcified due to fluoride and heavy metals. This will inhibit its ability to produce melatonin (needed to regulate the sleep cycle) as well as restrict any potential spiritual or psychic function it may possess. Watch the following video to learn how to decalcify your pineal gland.

FREE subscription to Receive Quality Stories Straight in your Inbox!