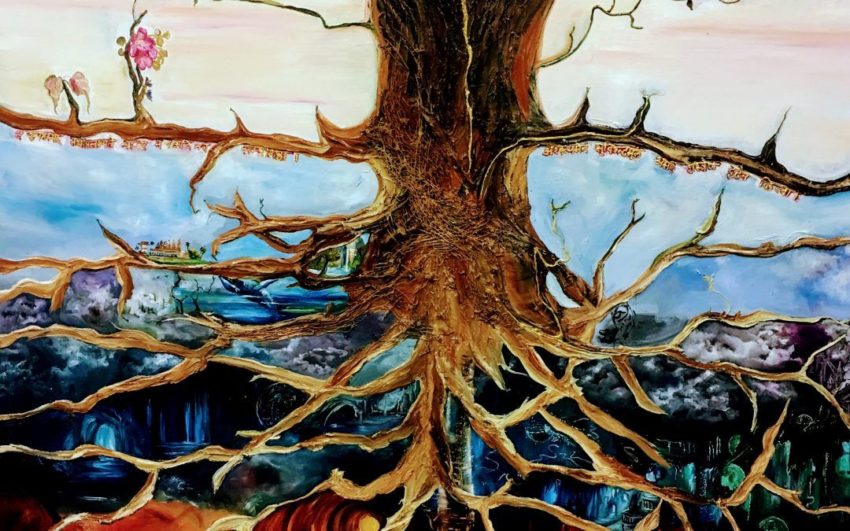 “We are composed of agonies not polarities.” ~ James Hillman

The Inverted tree (arbor inversa), rooted in the heavens and flourishing earthward, is an archetypal meta-symbol for contrarianism, sacred inversion, and reverse-engineering.

With its lower structure fixed above, planted in thunder, and its summit here below, casting lightning, the inverted tree is the antithetical agency of mystics, shamans, and sacred clowns the world over.

As Jung quotes from the Bhagavad-Gita…

“There is a fig tree
In ancient story.
The giant Savitha,
The everlasting,
Rooted in heaven,
Its branches earthward;
Each of its leaves
Is a song of the Vedas.
And he who knows it
Knows all the Vedas.”

Planted in the heavens by the roots of their hair (dreads) the person fortunate (unfortunate) enough to have the magical (tragic) experience of possessing a reversed kundalini is in for quite a ride.

Holding the tension between opposites, those with a reversed kundalini live between worlds, rattling the heavens and biting the earth. They are peripheral, on the edges, flirting with limits and sweet talking them into becoming limitless.

Their shadows are white (initiated). Their halos are black (). They blur boundaries by maintaining the unity of opposites. They are guided by the Midnight Sun (sol niger). Their luminous shadows shine like beacons of darkness into the blinding light of “everydayness.”

“If you don’t become the ocean, you’ll be seasick every day.” ~ Leonard Cohen

Crowned by the earth and anchored in the universe, the inverted kundalini energy flips the script. It turns the tables on fixed notions about how energy flows. The inverted tree is groundless but not lost. It’s not homeless; it’s homefull. The vast cosmos is its bedrock, its cornerstone, its home.

Those with the inverted tree inside them experience wanderlust like no other. They cannot stay put. Their crown chakras are spinning them into earthly adventures, into manifested Hero’s Journeys, and there is much adventure to be had. The earth is a playground, and the mystics, shamans, and sacred clowns are on recess.

They don’t need “wax wings” to fly over the “labyrinth,” for they are already inherently grounded in flight. Flight is their homeland, their medium, their soulcraft. Becoming entrenched, fixed, immobilized, or buried in the mundane is what they fear.

Their version of “flying too close to the sun” is becoming stuck in a tired and banal routine.

“The roots of all living things are tied together. Deep in the ground of being, they tangle and embrace. If we look deeply, we find that we do not have a separate self-identity, a self that does not include sun and wind, earth and water, creatures and plants, and one another.” ~ Joan Halifax

With its branches fractaling earthward, the inverted tree bears fruit filled with “magic elixir.” And since it is rooted in cosmos it doesn’t even have to “steal it from the gods.” It delivers it wholesale. It rains down the “nectar of the gods,” bypassing the gods altogether and hand-delivering New Knowledge to the tribe.

Those with reversed kundalinis must come to terms with having their crowns buried. Where most people’s crown chakras branch upward, cosmically drawn into the thousand-petaled lotus, those with the inverted tree inside them have the thousand-rooted lotus, inverting ascendant enlightenment into a sacred descent into Gaia.

Like Mother Earth herself has crowned them, or at least knighted them, as forces of nature first and people second.

“In the light there is darkness, but don’t take it as darkness. In the dark there is light, but don’t see it as light.” ~ Shunryu Suzuki

It is primal. It’s intuitive. It’s umbilical. It’s felt in the gut. It’s light that must be integrated. So. Is the third eye in the sacral or is the sacral in the third eye? Who knows? Either way, this umbilical connection is a flow state. It’s a moon eye, effecting tidal forces.

The voice of the sun

“All of us, among the ruins, are preparing a renaissance beyond the limits of nihilism. But few of us know it.” ~ Camus

With the inverted tree inside you, the sun rises up from the solar plexus and into the throat. Vocal harmonies become fiery and fierce. The Manipura vibrantly burns as it takes on the frequency of language: poetry pierces the heart, philosophy inflicts the all-too-serious self.

Speaking truth to power is second nature, melting down so-called golden idols and ruthlessly poking holes into the bloated ego of authority. Those with reversed kundalinis write with blood. They speak with ferocity.

They strike with iron-hot rhythm, flipping outdated scripts and turning entrenched tables. Their art is shock-value-happy as it disturbs the comfortable and comforts the disturbed.

As Nietzsche writes: “Of all that is written, I love only what a person has written with his blood. Write with blood, and you will find that blood is spirit.”

The heart is the heart

“Whenever a knight of the Grail tried to follow a path made by someone else, he went altogether astray. Where there is a way or a path, it is someone else’s footsteps. Each of us must find our own way. Nobody can give you a mythology.” ~ Joseph Campbell

“Nobody can give you a mythology.” It’s up to you to discover your own way. Even if you tried to adopt someone else’s mythology, or even your own culture’s story, you’d still have to live your own life. You would still be doing it your way.

So, you might as well make your own mythology to begin with. What I call Self-inflicted Mythology. This entire article is an example of it. Build off the mythologies of history, of course. Stand on the shoulders of archetypes.

Take this piece from this mythology and that piece from that mythology, but then connect it to your own unique imagination. Be creative. Think outside the box. Push your culturally-prescribed comfort zone. It’s all yours for the making.

You are the hero of your own journey. You might as well own it by creating your own mythology. If nothing else, it will make things more interesting. Life is too short not to make it interesting.

The heart is the heart. Whether your kundalini is reversed or not, it’s the primeval pivot point of the human condition. It sustains our roots even as it feeds our flourishing. It’s the center of the multilayered Self.

We use symbols to describe these “layers.” We call them chakras, energy points, masks, archetypes, consciousness, subconsciousness, the collective unconscious. Whatever we call it, reversed kundalini or not, we are describing the subjectively objective state of the human condition.

We are describing the unfolding, evolving, near-unexplainable Self. Creating our own mythology is a tool toward deepening that search, towards discovering meaning despite a meaningless universe.

The Cosmic Tree by Jayashree Krishnan