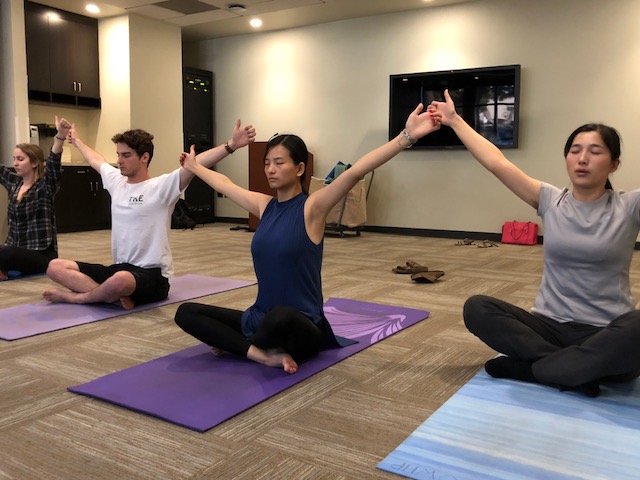 Every Wednesday afternoon, yoga instructor Susan Biddlecomb leads a complimentary Kundalini yoga class in the Engemann Student Health Center. The class is part of the Happy Hour series sponsored by the Office for Wellness and Health Promotion, which offers a variety of free yoga classes throughout the semester. Kundalini yoga is one of the primary classes offered, providing students without any prior experience or training the opportunity to learn an uncommon yoga practice.

Biddlecomb has been practicing Kundalini for almost a decade. As Director of Information Systems at Engemann, she originally started teaching the class to fellow staff members as a way to get people moving throughout their typically sedentary days at the office.

“As a staff member, I knew that there were people that could use something to get moving during the day,” Biddlecomb said. “My thought was just to share [the practice] with other people and to help them as best as I could.”

From there, the Kundalini classes blossomed, forming the bulwark of the Happy Hour series. Today, the practice is offered three times a week, attracting a variety of students and faculty members alike.

As a practice, Kundalini is centered on breathing, meditation, exercise and endurance. Originally brought to the United States in 1969, the class involves a series of exercises that are connected to a greater theme, or “crea,” that is articulated at the start of the session. Each session begins with a warm up and ends with meditation guided by the sounds of the gong. The exercises performed during the class are different each week.

“The beginning and the end of each class are the same,” Biddlecomb said. “And within that, there are three components: warm-up, exercise sets and meditations.”

Throughout the class, participants are instructed on how to breathe, where to shift one’s focus and which part of the body to emphasize in each stretch or movement. Embedded in each hour-long session are chants and meditations dictated by the instructor, each of which are designed to stimulate energy flow.

“Almost everything we do in this practice is related to moving energy in some way,” Biddlecomb said. “There are probably close to a thousand sets, and all the sets are exercises in a sort of order that move energy. Some of the exercises are just breaking up blockages in one area of the body.”

Biddlecomb also said that these meditations can be highly specific. Throughout the semester, she utilizes various themes depending on the social and political climates of both the University and the nation.

“I have a pool of themes or topics that I pick from; there are some times when I will change up the class based on what’s happening in the world,” Biddlecomb said. “There are meditations for very specific situations that affect your nervous system in a major way, such as addiction, self-animosity, natural disasters [and] warfare.”

Biddlecomb highlighted the primary benefits of consistent yoga practice for students at USC, underscoring its positive effects on work ethic and mental health.

“This practice will affect your physical body as you move energy, but students have also told me over and over again that their practice has helped them to clear their minds and be better able to focus on their school work and activities,” she said.

Furthermore, Biddlecomb added a personal note to conclude the class, expressing how Kundalini has transformed her life and career.

“Yoga was a plunge into something I had never done before,” she said. “But ultimately, I found my voice through it.”