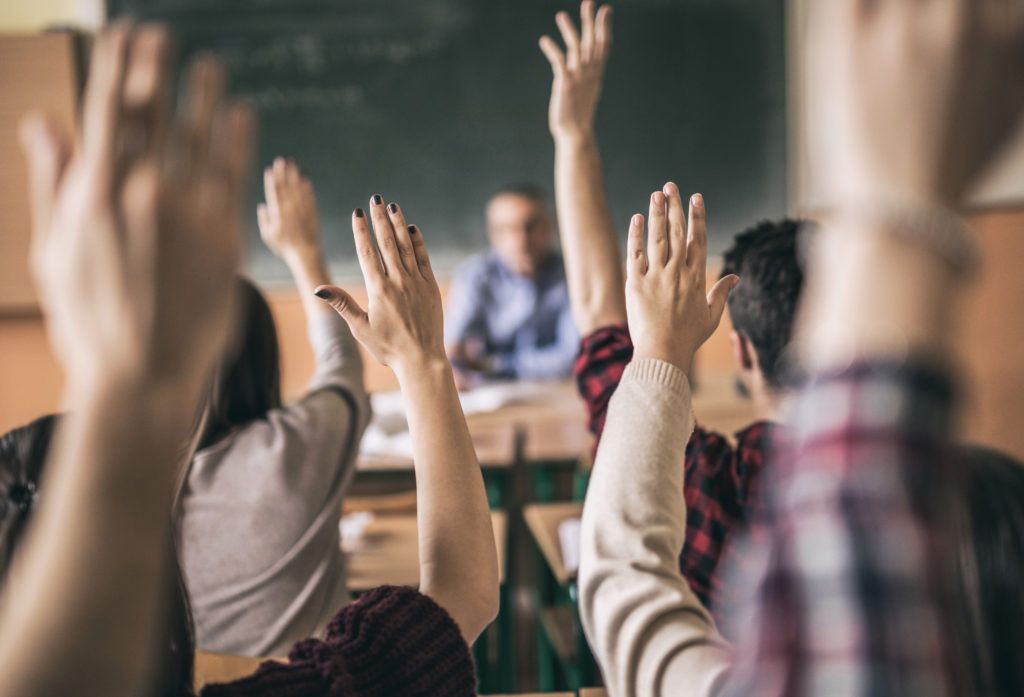 Written by Ned Anderson, a buddhify user since 2015

I’m a teacher at Abercorn Secondary School in Glasgow, where I work with autistic and special needs children ages 12 to 18. My pupils get to experience meditation as part of their third-year Religious Education (RE) course.

Early on, when I started covering Buddhism in the curriculum, we would watch videos where they’d see monks meditating. They’d ask ‘What are they doing? What’s that?’ They were curious and wanted to try it. In more recent years, I’d also been reading about how mindfulness is helping children with their mental health, so that ended up being the catalyst for actually integrating it into the course. We’ve now done meditation as part of their studies on Buddhism for the past three years.

Why I introduced my students to meditation

A lot of my pupils talk about anxiety and stress. They experience it around pretty much everything — family relationships, friendships, classwork, using the bus, and going out in public. They’d felt like these were things they could do nothing about and that they were just stuck with these feelings.

I was looking for ways to help them work on these feelings. I thought mindfulness and meditation practice would be a helpful skill, and it was something I could bring a larger focus on during our studies on Buddhism. It was something that was practical and that we could all do together.

I think it works to our advantage that is only the third year when meditation comes into their curriculum. It’s not until that age that I think they’re old and mature enough to be able to sit and really get something out of it. It’s also at this age that they begin to start talking about feelings like anxiety and stress, so the timing is really ideal.

I was looking for ways to help them work on these feelings. I thought mindfulness and meditation practice would be a helpful skill.

Many of my kids, especially our autistic pupils, experience a great deal of anxiety about feelings not being the way they want or expect them to be. They know that they can get really stressed around change and freak out in situations where they feel overwhelmed, so mindfulness and meditation definitely helps them cope and relax.

Some of these kids are not always the most articulate, part of the reason they’re here is they’re tied up in their communication difficulties. Beyond the benefits of dealing with stress, I’ve seen that through learning the skill of mindfulness they gain the confidence to speak about who they are and be themselves. It can be quite remarkable.

One of the best stories I have is about one of the first pupils that I used meditation with, who is a six-year now. In those intervening times, he has come out as gay. When he started with meditation, he had a lot of difficult feelings around his sexuality and wasn’t comfortable talking about that stuff. I think meditation helped him through all that.  Now he is very comfortable in his sexual identity. Three years later, I think he still meditates. He’s no longer in my class, but he’s out there in the world as a confident young man. I think the practice has been part of his journey.

How we practice in the classroom

Originally, I did full lessons on meditation. We’d look at what it is, why you do it, and how it helps people. Then they would do small bits of practice and afterwards write about how it affected them or what they got out of it. Once it was introduced in class, we would also informally, every now and then, do a little five-minute meditation either at the beginning or at the end of a lesson.

The way I do it now is we set aside whole 15-minute periods where we can practice with no interruptions. I’ve found a room in the school where we can close down the blinds, roll out yoga mats, and turn the lights down low. We first have a conversation as a group about any personal issues or difficult feelings that are affecting them, and then go from there. I plug my phone into a set of speakers and we work through a series of meditations.

The response from students has been mostly really great. They may think it is silly, funny, or weird at first. But most of the group gets over that very quickly. The most motivated children are ones that actually have a personal reason to engage, who recognize they have feelings that they want to work on and are willing to focus. You’ll get a couple that fall asleep. And course, you get some that don’t benefit from it or they say it doesn’t help them or affect them. But I would say the majority really love it. They come out feeling energized, clear, and more relaxed.

Even after we move on from it in the curriculum, many of them say it is something that they want to do at home in their own time. So I try to remind them that meditation is a resource they can use outside of the classroom. I definitely have plenty of conversations with pupils when something’s been stressing them out, and I’ll say, remember, you can go do some meditation when you get home. Since they’ve had an introduction and know that is an outlet, they have the confidence to go and do it on their own.

Advice for other teachers interested in bringing meditation into their classroom

You have to take a certain approach to be successful and effective in sharing this practice with young people. It’s really all about finding the meditations that your pupils connect with best. Here are a few tips I’ve learned first-hand on what to look for:

I encourage any teacher that can see the use in meditation to try it. Particularly, if you have classes that are fidgety or kids that bicker, that need something to calm them down, it’s effective. But it’s not going to be for every class. It’s not going to be for every pupil. It ultimately depends if you’ve got time in your curriculum to do it, and many schools may not have that time. Fortunately, we do.

Ned Anderson is a teacher at Abercorn Secondary School in Glasgow, where he works with autistic and special needs children. You can find ‘Ocean’ under the Growing Wisdom category on the Kids wheel.

If you feel you have learnt something important through your meditation practice and you’d like your share your insight or experience we’d love to hear from you. Let Dana know via and she’ll get in touch.

Bringing meditation to the classroom