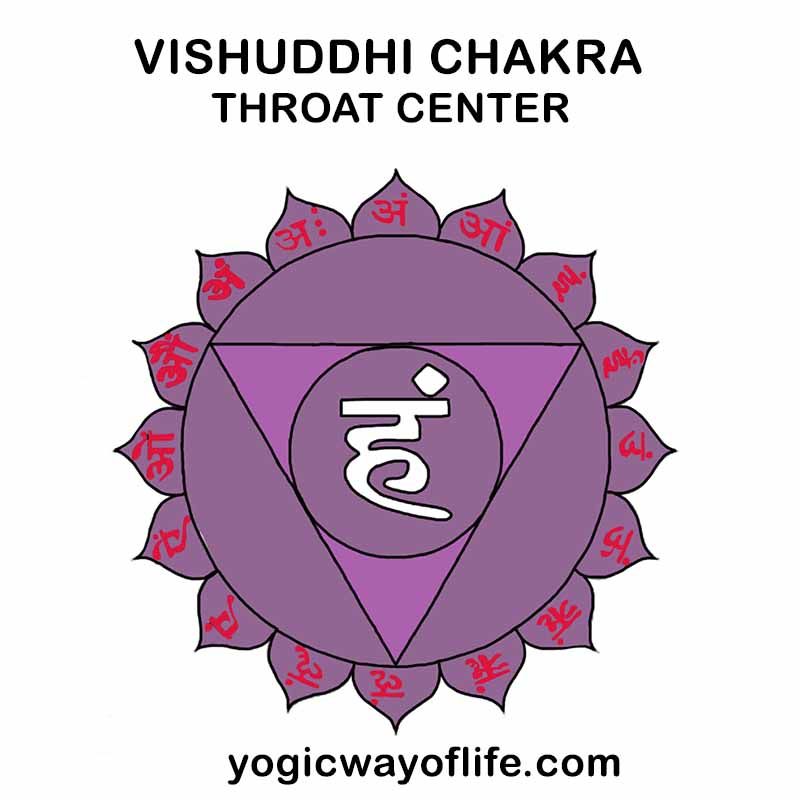 Vishuddhi Chakra or the throat chakra is the purification centre. In Sanskrit, Suddhi means to purify, and Chakra means a wheel or vortex or energy. Vishuddhi chakra harmonises all the opposite thought patterns. It is the centre of nectar as well as poison. In the Indian mythology, Lord Shiva is said to have drank the poison to save the world, which can be seen as a blue tinge on his throat.  According to tantric texts, there are seven chakras or plexuses. Vishuddhi is the fifth plexus.

It is said that a sage who meditates on this chakra becomes eloquent and wise, enjoys uninterrupted peace of mind, knows about past, present and future, becomes free of diseases and sorrow and is a benefactor of all. In tantra, every chakra is depicted as a flower with many petals. There are many texts that describe the Vishuddhi Chakra. The most vivid among them is the Shad Chaka Nirupana, which has been translated to English by Sir John Woodroffe in his book, The Serpent Power.

Vishuddhi Chakra is described as a flower with 16 petals. The petals are purple in colour (smoky grey according to some). On the petals is found the seed letters am, aam, im, eem, um, ооm, rim, reem, lrim, lreem, em, aim, om, aum, am and ah written in golden colour.

In the centre or pericarp of the flower is a white circle like a full moon which represents the space element or Akasa Tattva. Within it, on an elephant white as snow, sits the seed letter of the chakra Ham, which is white in colour and holds in his four hands the noose, the goad and the other two hands display the gesture of granting boons and dispelling fear. In his lap, is the great God Sadasiva, three eyes, five faced, snow-white in colour, with ten arms and clothed in tiger skin.

Inside the pericarp of the flower there resides the Deity of the Vishuddhi Chakra called Sakini. She is described as purer than the ocean of nectar. She wears a yellow raiment and in her four hands she holds the bow, arrow, noose and the goad.

Seed Mantras or Bija Mantras are one letter syllabled mantras with hidden power. The mantra for Vishuddhi Chakra is Ham. Practitioners use the repetition of this seed mantra to activate the chakra.

Apart from this, the petals of the chakra also have seed letters associated with it. The petals of Vishuddhi chakra has these 16 letters – am, aam, im, eem, um, ооm, rim, reem, lrim, lreem, em, aim, om, aum, am and ah written on it. These are also used by practitioners while visualising the chakra.

Each chakra has a presiding divinity or deity, also known as Chakradhistadhatri. Goddess Sakini is the presiding deity of Vishuddhi. She is three-eyed, wears a yellow raiment and has four arms displaying bow, arrow, noose and goad. Goddess Sakini is white like light itself (Jyotih Svarupa) and purer than the nectar in the moon.

In tantra, Vishuddhi Chakra is related to the ears and the sense of hearing.

How to Activate Vishuddhi Chakra?

There are many ways of activating a Chakra or plexus. One way is the use of Bija Mantras (One syllabled sacred sounds). The bija Mantra of Vishuddhi Chakra is Ham. Chanting of the seed syllable Ham can be used to activate Vishuddhi chakra.

Apart from these, there are tantric methods of visualisation and meditation of the chakra to develop the full potential of the plexus.

Here the practitioner is open to experiences of life. He is able to take in the good and bad experiences, integrate them and harmonise them for his further spiritual growth.

Vishuddhi is also the centre for verbal as well as higher communication.

This is the chakra where man comes to terms with all the opposites of life and can deal with the opposites without conflict and confusion.