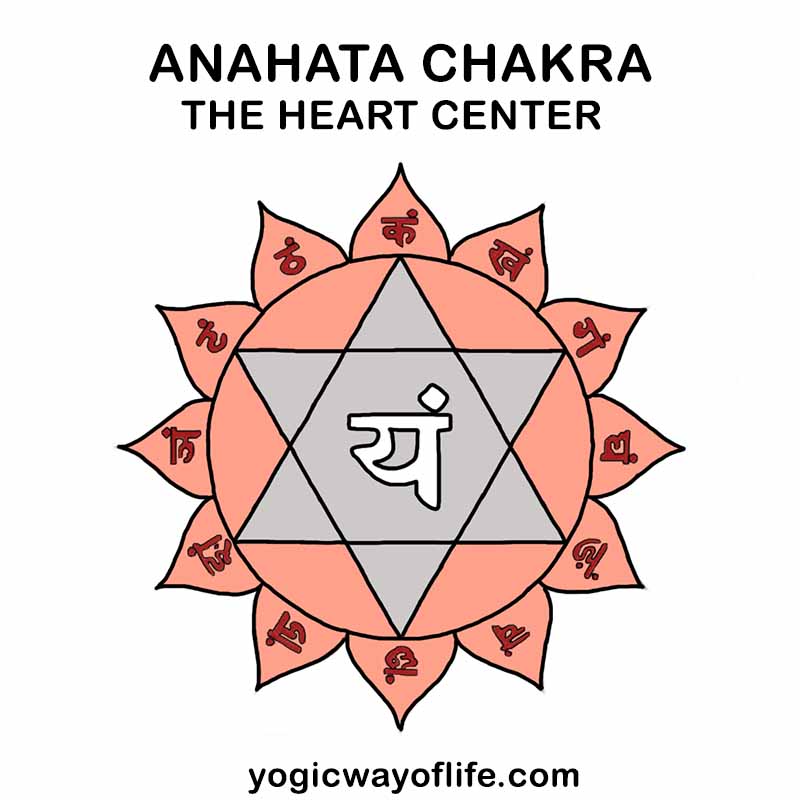 Anahata Chakra or the heart centre is important in the evolution of mankind. It is the centre of unconditional love and also the beginning of free will, to control one’s karma. In Sanskrit, Anahat means unstruck and Chakra means a wheel or vortex or energy. Anahata chakra is the place from where the unstuck sound emanates. At the physical level it can indicate the sound of heartbeat which is constantly working till death. But, in yogic texts the reference is to the inner sounds that a yogi hears during the practice of Nada Yoga. These sounds are heard by itself, without any other aid; hence it is called the unstruck sound. Anahata Chakra deals with the respiratory and circulatory system.

In the text Shatchakra Nirupana, it is said that meditating on the heart makes a practitioner foremost among yogis and his senses are under his control, yet is adored by the opposite sex. He talks with inspiration and has the ability to enter another body at will.

The heart centre is also considered the seat of the soul or Jivatma.

Anahata chakra, also called the heart centre, is located inside the spine or Sushumna at the level of centre of the chest. This is the actual location. But externally, the chest, just above the sternum can also be considered as a trigger or activation point for Anahata. The chakras are more connected to the pranic body. Anahata chakra is not part of the physical body but is related to the respiratory and circulatory system.

In tantra, every chakra is depicted as a flower with many petals. There are many texts that symbolically describe the chakras. The most vivid among them is the Shad Chaka Nirupana, which has been translated to English by Sir John Woodroffe in his book, The Serpent Power.

Anahata Chakra is described as a flower with 12 petals. The petals have the colour of the Indian Bhanduka flower (reddish). Some say it is blue in colour. On the petals are found the Sanskrit letters – Kam, Kham, Gam, Gham, Ngam, Cham, Chham, Jam, Jham, Nyam, Tam and Tham written in the colour of vermilion.

Inside the pericarp is a smoky hexagonal mandala or region of Vayu, or air element. Inside it is the Bija of air element Yam, seated on a black antelope and having four hands. Within it is the merciful lord (some say Shankara), bright like a sun and displaying the gesture of giving boons and dispelling fear.

Inside the lotus is the presiding deity of Anahata called Kakini sitting on a red lotus. Kakini is yellow in colour and like a new lightening, three-eyed, auspicious and benefactress of all. She wears all kinds of ornaments, wears yellow raiment and is four armed with noose, skull and gestures of giving boon and dispelling fear. Her heart is softened with drinking of nectar.

Inside the pericarp of the lotus also is an inverted triangle indicating Shakti. In side it is a Linga (Shiva) by the name Vana Linga which is like shining gold.

Seed Mantras or Bija Mantras are one letter syllabled mantras with hidden power. The mantra for Anahata Chakra is Yam. Practitioners use the repetition of this seed mantra to activate the chakra.

Apart from this, the petals of the chakra also have seed letters associated with it. The petals of Anahata chakra has these 12 letters – Kam, Kham, Gam, Gham, Ngam, Cham, Chham, Jam, Jham, Nyam, Tam and Tham written on it. These are also used by practitioners while visualising the chakra.

Each chakra has a presiding divinity or deity, also known as Chakradhistadhatri. Goddess Kakini is yellow in colour and like a new lightening, three-eyed, auspicious and benefactress of all. She wears all kinds of ornaments, wears yellow raiment and is four armed with noose, skull and gestures of giving boon and dispelling fear. Her heart is softened with drinking of nectar.

In tantra, Anahata Chakra is related to the skin and the sense of touch.

How to Activate Anahata Chakra?

There are many ways of activating a Chakra or plexus. One way is the use of Bija Mantras (One syllabled sacred sounds). The bija Mantra of Anahata Chakra is Yam. Chanting of the seed syllable Yam can be used to activate Anahata chakra.

Practice of Bhramari Pranayama can also activate Anahata. Practice of Ajapa-Japa or spontaneous effortless chanting of a mantra is also useful. Apart from this, concentration and meditation on the chakra location and other visualisation techniques can also be used.

Each plexus is associated with a certain quality of the mind and the evolution of the person. Anahata is the fourth chakra in the evolution of man and deals with unconditional love, healing and free will. At the lower chakras, man is completely under the sway of his fate or destiny. When the person evolves to the level of heart chakra, he breaks the shackles of karma to some extend and express free will.

When you are in Muladhara, Swadhistana or Manipuraka, you are still governed by instinctive behaviour. When you reach Anahata, for the first time, you are able to act consciously without being a slave of your past impressions.

Anahata is also called the wish fulfilling tree. At this stage, your thoughts begin to gain strength and can materialise your desires in the outside world.

At the lower chakras, man is acts from selfish motives only. Even at Manipuraka, person may be dynamic, but always acts for his selfish needs. But at Anahata, a great change happens. The practitioner is able to go beyond the selfish concerns and act selflessly. They are able to love the world and the society without thinking of any personal gain.