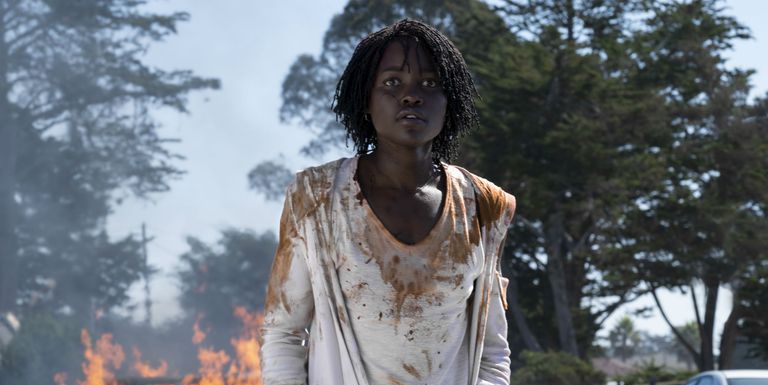 Note: Contains major spoilers for Us, including its ending.

Jordan Peele’s Get Out follow-up Us is now terrifying audiences in cinemas and leaving them with plenty of questions.

The brilliant horror movie centres on a family whose trip to their beach house goes horribly wrong as they’re terrorised by four mysterious figures who look exactly like them. But who are they and what do they want?

Peele told Digital Spy that he’s not all that worried about spoilers but since we wouldn’t want to ruin the surprise, don’t read past the trailer if you haven’t seen it yet as major spoilers await.

The mysterious figures that invade Adelaide (Lupita Nyong’o) and Gabe Wilson’s (Winston Duke) house are known as The Tethered. As Adelaide’s doppelgänger Red states, they want to carry out the “untethering” and kill their original versions.

You see, some shady government project (that took place decades ago) saw people cloned in an attempt to control people. But whoever was running it found out that while you could clone the body, they couldn’t clone the soul. That meant they couldn’t control the people, so the experiment was abandoned.

It feeds into Peele’s exploration of the Jungian psychological idea that we all have a “shadow”, a dark side. “We are our own worst enemy, not just as individuals but more importantly as a group, as a family, as a society, as a country, as a world,” he told The Guardian.

At the start of the movie, we’re told that there are miles of tunnels that run under the US that have “no known purpose”. Well, in Us, their purpose is to house The Tethered, AKA those “shadows”, and that’s where they stayed for decades.

That is until Adelaide revisits the Santa Cruz Boardwalk with her husband and two kids.

Back in 1986 when she was a child, Adelaide wandered off and went into a Hall of Mirrors where she encountered her Tethered doppelgänger Red.

And here’s the kicker. We’re led to believe during the movie that Adelaide escaped, but she didn’t. The finale of the movie sees Adelaide kill Red to save her son Jason, only for it to be revealed that Red switched places with Adelaide in 1986, meaning the ‘real’ Adelaide is dead.

It explains why, after that incident on the Boardwalk, Adelaide’s parents noticed a change in her, especially that she didn’t talk, and it explains why Red is the only one of The Tethered who can talk.

Red – the ‘real’ Adelaide, but we’ll carry on calling her Red for the sake of clarity – became the default leader of The Tethered after the experiment was cancelled. It appears this came from a moment when the rest of The Tethered saw her echo Adelaide’s dance on the surface.

Her position as leader feeds into The Tethered’s distinct look. Before Adelaide was taken in 1986, her father had just won her a Thriller t-shirt as she was a Michael Jackson fan, hence the red overalls and one glove combination of The Tethered.

Not sure it explains why gold scissors are their weapon of choice, but Peele told EW that he chose them because of their “duality”. “A whole made up of two parts but also they lie in this territory between the mundane and the absolutely terrifying,” he added.

But that’s not the only question left unanswered about The Tethered.

While we see a fair few of The Tethered in the facility under the Santa Cruz Boardwalk, it’s unclear if the entire population of the US was cloned or if Santa Cruz was chosen specifically for the experiment.

If that’s the case, it’s pretty fortunate that Gabe also lived in Santa Cruz in the 1980s and, if he didn’t, how did Gabe’s Tethered doppelgänger Abraham get to Santa Cruz? Also, in their first encounter, Red talks about how the doppelgängers of Adelaide’s children were ‘born’, so can all The Tethered give birth?

And while we’re told that the experiment was a failure and The Tethered couldn’t control people, how is it that Jason is able to make his Tethered doppelgänger Pluto walk backwards into a fire?

But really the biggest question is: where did they get all the red outfits, gloves and scissors if they’ve been underground this whole time?

There’s plenty left that we don’t know about The Tethered come the end of Us, but Peele told Digital Spy that there is scope to fill out their backstory.

“I don’t close creative doors because I don’t know where I’ll be in a few years. There’s greater mythology involved with this movie, as there was with Get Out, that is not even in there, so there’s room for more stories in the Us universe,” he explained.

Hopefully Peele will see fit to explore this and solve some key questions, but Us leaves plenty to chew over and discuss over a post-screening drink all the same.

The movie never reveals what the passage is, so here it is for you, according to the King James Bible: “Therefore thus saith the Lord, Behold, I will bring evil upon them, which they shall not be able to escape; and though they shall cry unto me, I will not hearken unto them.”

To understand the passage and its context within Us, you have to look at the Book of Jeremiah in general. Jeremiah was a Prophet and warned the Jews in exile in Babylon that God wasn’t happy that they were worshipping false idols, and that it could lead to all sorts of misery and, eventually, the fall of Jerusalem.

The particular passage used in Us is about how God won’t even come to their aid even once they realise the error of their ways.

In modern terms, the likes of money and technology could be considered as false idols, and it’s no surprise that the main victims in Us are the Tyler family, led by Elisabeth Moss’s Kitty and Tim Heidecker’s Josh.

They’re flashy and their children are always on their phones, so when the “evil” comes to them in the form of their Tethered doppelgängers, they don’t stand a chance. Kitty even tries to call for help after being stabbed (not from God, but the police), only for her smart technology to let her down and play ‘F**k tha Police’ instead.

We’re only skimming the surface of the religious context of the passage though, so there’s plenty to read around if you wanted.

(On the surface as well, there’s a nice symmetry in 11:11 that mirrors the central concept of doubles.)

The final part of Us that helps explain what The Tethered are up to is Hands Across America.

Us opens with the younger Adelaide watching an advert for the charity event held in the US on Sunday, May 25 in 1986. The idea was that people would hold hands in a human chain across the country, with each donating $10 towards local charities to help those in need, including the homeless.

Unlike Live Aid though, Hands Across America couldn’t quite get the same celebrity involvement, and the theme song was performed by Toto and written by Marc Blatte, John Carney, and Larry Gottlieb.

The goal was to raise $50 million, but according to the New York Times, the event raised “a net of only $15 million for the hungry and homeless after all costs were paid”. Celebrities including Kenny Rogers, Dionne Warwick, Michael J Fox and, erm, Mickey Mouse took part, but the Times reported there were “lots of gaps in between”.

But why is this relevant in Us? Well, the last thing Adelaide would have known before being switched with Red in 1986 was Hands Across America.

She wouldn’t have been aware that the charity effort wasn’t exactly successful, so it makes sense that when she came to planning The Tethered’s uprising, she would use the event as a template.

When The Tethered come to the surface and kill their originals (most of them are more successful than Red’s attempts to kill the Wilson family), they hold hands and form a Tethered chain across Santa Cruz.

What they hope to achieve from it is unclear, other than to raise awareness that they exist after society has ignored them for decades. The problem is, of course, that they’ve killed most of the people around so there’s no one to see it.

The haunting last shot of Us is a helicopter shot of The Tethered’s Hands Across America chain, and they’ve been considerably more successful than the 1986 attempt.

Us is in cinemas now.