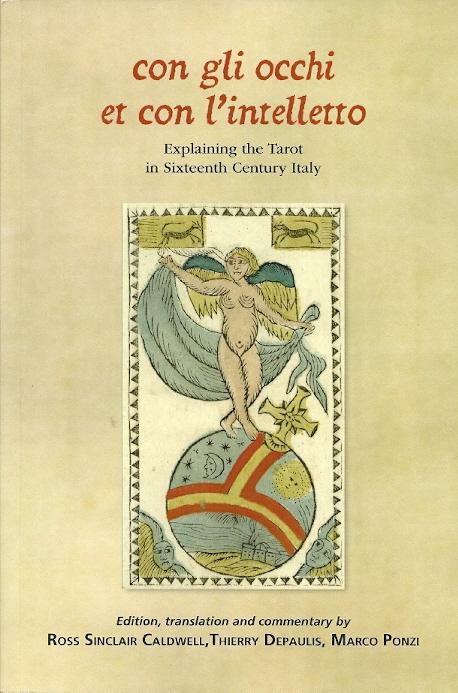 Around the year 1565, two men on opposite sides of northern Italy wrote down their thoughts about the moral lessons in the tarocchi deck. In the 1980s, both essays were discovered by playing card researcher Franco Pratesi, and were recently published in Italian and English as Con gli occhi et con l’intelletto: Explaining the Tarot in Sixteenth Century Italy. Generous footnotes and introductory material by Ross Sinclair Caldwell, Thierry Depaulis and Marco Ponzi put the essays in their historical context. This extremely important book shows us how a typical, well-educated Christian of the time would have seen the cards, without the distractions of occultism and Egyptomania that came a few centuries later.

Let’s look at each essay separately.

Francesco Piscina wrote Discorso in his early twenties while a law student in Piedmont. The material was presented as a public recitation then published by a local press. Only two copies exist, in a library in Piedmont and in a private collection. Piscina tells us his ideas came to him suddenly while watching a lady play the game of tarot — much like De Gebelin two hundred years later saying he was suddenly struck with the idea that the tarot trumps are Egyptian hieroglyphics while watching ladies play the game in a Parisian drawing room.

Piscina wanted to discover the moral lessons conveyed by the inventor of the game of tarocchi. To know this, the proper order of the cards is paramount, because the story in the trump sequence depends on knowing which cards are trumped by other cards. Piscina uses the trump order that was common in Lombardy and Piedmont and evolved into the Tarot de Marseille, with several exceptions that show the deck was still in flux in the sixteenth century.

While discussing the World card, he mentions the symbols of the four Evangelists in the corners as proof that the trumps are teaching us to be good, conventional Catholics. But we don’t know of any World cards from that time that contained the four Evangelists. They don’t appear until the Tarot de Marseille pattern emerged one hundred years later. Did he know of a TdM-like deck that’s lost to us? He discusses the Bagatto is an innkeeper, not a juggler or craftsman. I wonder if this is an old, possibly local, tradition that’s lost to us but emerged into the light of day with the soprafino Bagatto raising his wine glass. (Or is he just a cobbler who drinks on the job?)

Piscina admits the essay was written on a whim, and it reads as if he were speaking off the cuff, giving us a range of interpretations along with his own. This is a bonanza for historians, as we can get a sense of how the cards were interpreted by others, rather than being stuck with just one person’s idiosyncratic ideas.

Piscina devotes only two long paragraphs to the suit cards. He divides the suits into two categories, a common practice that survives in our red and black suits. He interprets the suits as two types of war and two advantages of peace.

At the end of his essay he does some wordplay on Taroccho, showing us the word means a fool or an idiot. It makes sense that the game may have been named after the most powerful and active card in the game.

The second essay is called the Anonymous Discorso. Presumably, it was never published, but five handwritten manuscripts are distributed among various libraries. From textual analysis, it seems the author was from central Italy and he used the Ferrarese card order, with a few variations.

The author’s aim was to fill a gap in the literature of moral interpretation of games by giving cards their due. Nearly half the essay is devoted to the suit cards, where the anonymous author follows a long tradition of finding moral allegories in the four suits.

He starts by telling us that games were originally idle pleasures, but they evolved into vices that fuel our greed when we play for material gain. The designer of the game wanted to teach us that all is vanity; that worldly possessions and pleasures evaporate, and we would be better off contemplating God.

The four suits depict lust for money, glory and gluttonous pleasures, with greed for riches underlying it all. He divides the trump suit into two sections with the Devil as the pivot. Trumps below the Devil show the usual human situation, inflamed with passions and heading for hell. Cards higher than the Devil show us the way out of entanglement in worldly vanity by contemplating God and rising to heaven.

These two essays are unfiltered voices from tarot’s distant past. They bring to light what certain thoughtful people of the sixteenth century read into the cards. We owe a huge debt of gratitude to Franco Pratesi for discovering these rare manuscripts, and to Ross Sinclair Caldwell, Thierry Depaulis and Marco Ponzi for their dedication to tarot history, making it possible for all of us to read these essays.

I strongly recommend reading the review of an earlier edition of this book by the late Michael J. Hurst. He puts these essays in their context of the long history of finding allegory in the four playing card suits, as well as in dice, chess and other games. He also provides a translation of the first discourse we know of, from 1377, on the moral meaning of playing cards.

Get the book at Lulu