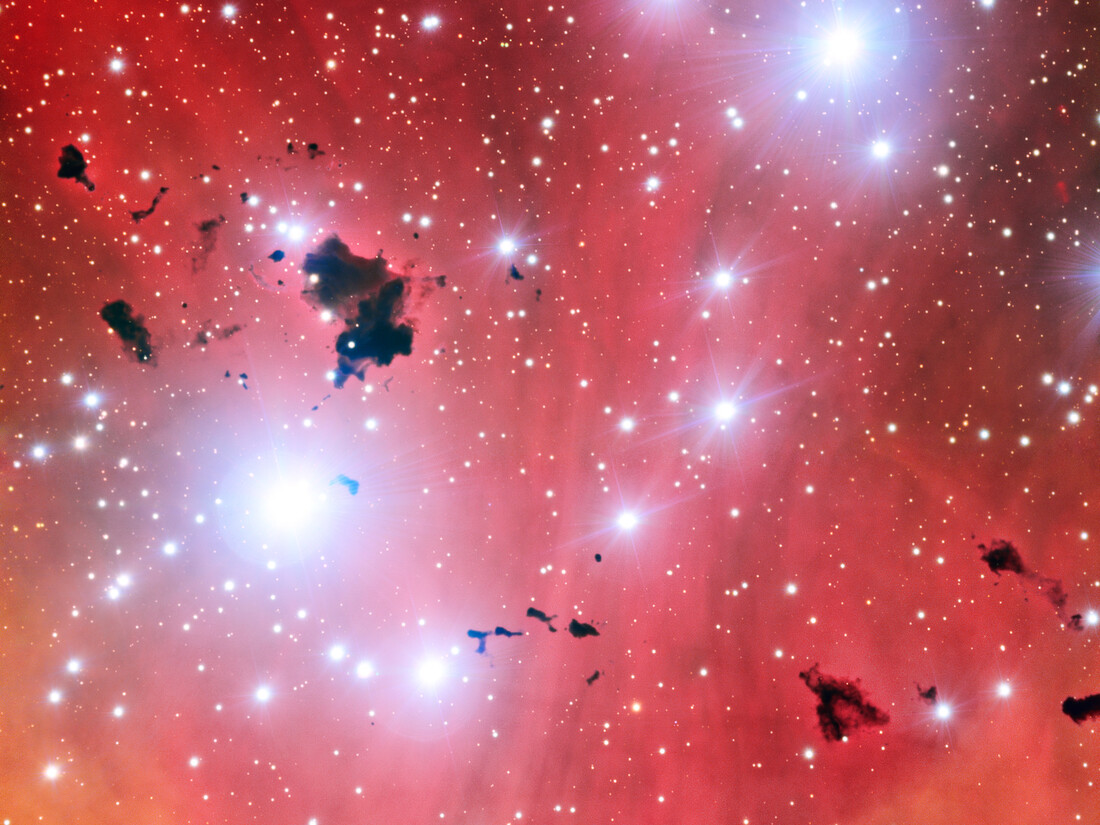 This view of a stellar nursery taken by the Very Large Telescope on May 23, 2013, also shows a group of thick clouds of dust known as the Thackeray globules silhouetted against the pale pink glowing gas of the nebula. ESO hide caption 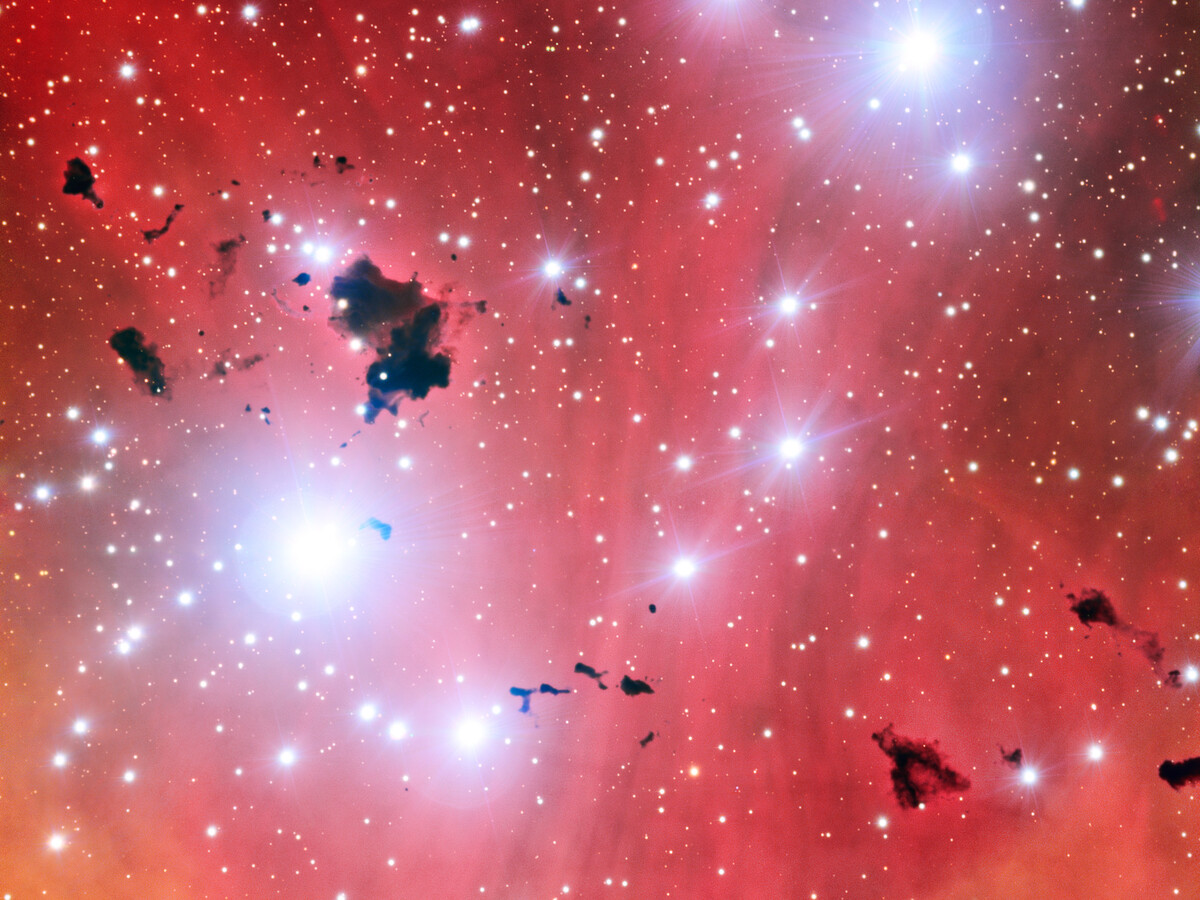 This view of a stellar nursery taken by the Very Large Telescope on May 23, 2013, also shows a group of thick clouds of dust known as the Thackeray globules silhouetted against the pale pink glowing gas of the nebula.

Often, as we go through the world, the key is to ask the right question.

When it comes to figuring out the nature of physical reality, part of that process starts at the absolute edge of the observable universe — the cosmic horizon, a distant layer from which light has only just, in this very instant, managed to reach us after more than 13 billion years of racing through space.

This intangible boundary between the knowable and the unknowable is, at present, roughly a thousand, trillion, trillion meters across — should you possess the means to measure it.

At the other end, in the deepest innards of every single speck of cosmos, is a scale of a hundred billion, trillion, trillionths of a meter. It represents the last meaningful physical scale within our present understanding of physics, a place where space-time itself gets choppy, uncertain, and decidedly problematic.

These two extremes span a jaw-dropping 63 orders of magnitude. To be fair, though, this isn’t an immutable constant of nature. Turn the clock back more than 13 billion years and you’d be able to find a moment when this number was merely 1. Over time, the expansion of the cosmos and the passage of light has unlocked all of those other scales, each one a new opportunity for novelty and complexity.

It wasn’t until the cosmic horizon spanned a colossal 10-15 meters that the possibility of a coherent, causally connected atomic nucleus even existed, had the universe been cool enough. It was another nail-biting wait before the observable universe covered 10-10 meters so that a whole atom could, in principle, exist as we know it.

A self-respecting universe couldn’t have a hope of ever producing a bacterium if it hadn’t opened up to a scale of at least half a micrometer. And, in truth, for anything like a microorganism to exist, the casually connected universe had to become much, much larger. Sizeable enough for its innards to begin to feel their mutual gravitational attractions across a mammoth range of distances, from 109 meters to at least 1021 meters. Enough for it to have a chance of brewing the stars and elements — ingredients that would, in turn, feed their novelty back to a microscopic scale, unleashing a blizzard of chemistry and complexification that would eventually build something akin to a single-celled living thing.

In other words, the real question is: How big a universe is needed to allow you to be sitting here reading these words?

Actually, 63 orders of magnitude might be a little more than is absolutely necessary. After all, the cosmos has been churning out stars and planets since well before our solar system came along, back to a time when we might drop a couple powers of ten in the scale of the cosmic horizon. But we don’t yet know whether anything quite like us has happened before, so the only thing we can say with certainty is that — in our very specific case — 63 is, and will always be, the magic number.

Our own horizon of ignorance has crept gradually outwards and inwards from a place surprisingly close to the logarithmic midway point of this cosmic range. That touchstone sits at about a tenth of a millimeter, like the very tip of your sharpened pencil, or the thickness of an eyelash. Barely a century ago, we hadn’t appreciated the real size of the universe that surrounds our sun and our galaxy. And while the nature of the tiny atomic and subatomic realm was rapidly becoming apparent, that inner gulf hadn’t revealed its true depths. It’s unarguable that, since then, we have made pretty spectacular progress.

But we don’t step back very often to take a look at the whole thing, our map of existence as it stands today, from end-to-end. I got to do this recently while writing, and wrestling with, a book —The Zoomable Universe. This project started out with a modest idea: revisiting the themes of several illustrated classics, from Robert Hooke’s Micrographia to Charles and Ray Eames’s famous Powers of Ten. It quickly evolved into a genre-bending, mind-twisting exploration of all we know and, more critically, an exposé of all that we don’t know.

Some of the most obvious gaps in our knowledge of the physical universe occur in what also appear to be the most boring pieces of existence: the spaces between luminous matter on a cosmic scale, and the more-than-million-trillion-fold span between the size of a proton and the Planck scale.

On the large scales, it’s the puzzle of unseen gravitating matter and unseen cosmic pressure, the dark stuff — matter and energy. On the small scales, it’s the decidedly bizarre nature of the subatomic, or at least the bizarre implications of our current physical models for the subatomic. Virtual quarks swarm around inside protons and neutrons, making these nuclear specks themselves composites of fields and their quanta, with perhaps little or no structure in the usual sense of the word. That peculiar condition seems to persist across some 20 orders of magnitude in scale.

These are great mysteries. Except I think that the mysteries with the biggest impact on how we perceive reality are those happening in plain sight, across that cluttered midway point in scale, and our realm of the senses.

It’s on our biological scales that the universe does something very, very funky. Billions of years of elemental and chemical brewing have produced structures capable of awareness, and capable of trying to decode the very thing out of which they’ve come. It’s the ultimate bootstrap, going from a near featureless primordial reality to something that deduces its own existence.

That’s what exploring 63 orders of magnitude leads us to. The nature of us.

So, I’m hoping that somewhere among the pages of The Zoomable Universe, filled with galaxies, planets, moons, mountains, wildlife, molecules, and quanta, someone will find the inspiration they need to figure out the next big question — and maybe find the answer, too.

Caleb Scharf is director of astrobiology at Columbia University and author of Gravity’s Engines, The Copernicus Complex and The Zoomable Universe (Scientific American/Farrar, Straus & Giroux, October 2017). Follow him on Twitter @caleb_scharf.

The Answer To Life, The Universe — And Everything? It’s 63