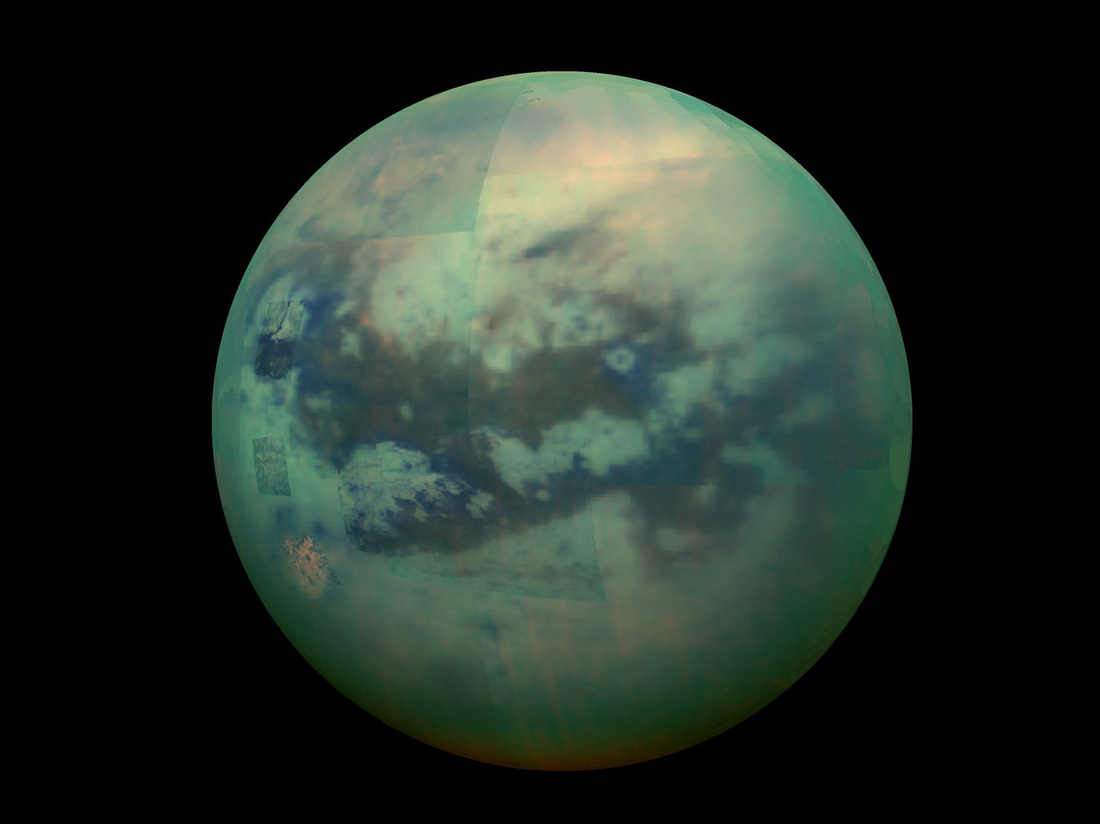 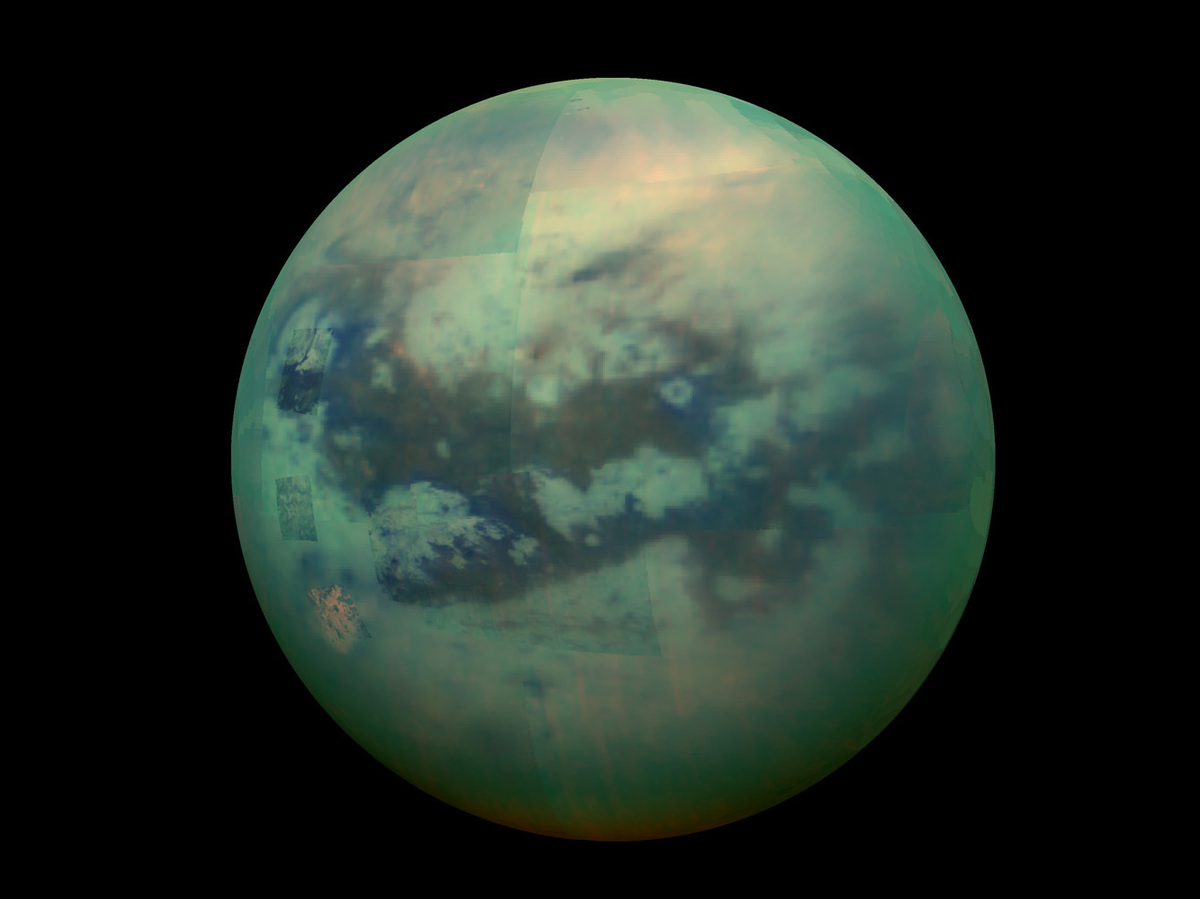 A composite image of Saturn’s moon Titan taken by the Cassini spacecraft.

I am a planetary scientist and once astronaut candidate finalist (read: space nerd).

But I have something to confess: I do not want to live on Mars.

But there is another place in our solar system where conditions are right for a self-sustaining, long-term human settlement: Saturn’s moon Titan.

To start with, let’s make clear that Titan is a moon that, in many ways, acts more like a planet. It has a thick atmosphere, with about 1.5 times the surface pressure of Earth’s atmosphere. None of the 177 other moons in the solar system has such an atmosphere. Plus, Titan is the only place in the solar system, other than Earth, with stable surface liquids: Titan has lakes and seas on its surface. So Titan is a remarkable, and very Earth-like, world.

Titan’s thick atmosphere is beneficial, because it means that you don’t have to wear a bulky pressure suit while you’re out and about on Titan. But the main reason I like it is simple: Titan’s atmosphere will help us stay alive. Out in space, radiation is deadly. Energetic particles from the sun, and especially galactic cosmic rays (GCRs), penetrate human tissue, causing cancer and cognitive disorders. To stay within NASA’s current cancer risk limits, astronauts can travel beyond Low Earth Orbit (LEO) for as much as 200 days; a Mars trip would likely be more like 600 days. But these damaging particles cannot make it to Titan’s surface; they’re absorbed by the atmosphere, meaning that it’s a safe environment for humans. Mars’s atmosphere is not thick enough to provide much shielding from GCRs — and Earth’s moon has little in the way of an atmosphere — so humans living in those places would probably need to live underground in order to protect themselves from radiation.

People living on Titan could walk around (or, rather, bounce around — since the gravity is 14 percent of Earth’s gravity, just a little less than at the moon) wearing suits to keep warm. It is cold on Titan (surface temperature of about -290 degrees F). And people would need to wear respirators to breathe oxygen, since the atmosphere is mostly nitrogen. The light on Titan is a little dim, like just after a sunset here on Earth, due to the haze particles in the thick atmosphere. People living on one hemisphere of Titan, the one always facing Saturn, would have beautiful views of the ringed planet.

A really fun (and potentially useful) thing is this: Thanks to the low gravity and thick atmosphere, people on Titan could easily fly under their own power if they strap wings to their arms! Future humans could also go boating on the lakes and seas, which are present primarily at higher latitudes.

Because it’s so cold on Titan, all the water is frozen — the lakes and seas are composed of liquid methane and ethane. These hydrocarbons (like natural gas here on Earth) are in abundance on Titan — not only in the lakes and seas, but covering the surface and in the atmosphere. These hydrocarbons present a ready source of materials for building things, such as habitats, out of plastics. Humans could burn methane to produce energy, perhaps using a nuclear reactor to power electrolysis of water (since Titan’s atmosphere doesn’t contain the oxygen we would need for the methane combustion). Another chemical energy option is hydrogenation of acetylene (i.e. 3H2 + C2H2); both hydrogen and acetylene are present in Titan’s atmosphere.

And we can consider using wind turbines for an alternate energy source. Titan’s air density is roughly five times that of Earth, so the potential wind power is substantial. Though there isn’t much wind at the surface of Titan (Cassini measurements indicate winds of just about 1 meter/sec; for comparison, an typical wind speed on Earth is roughly 4 meters/sec), the Huygens probe measurements showed winds of about 20 meters/sec at 40 km (about 25 miles) altitude — which means that tethered airborne wind stations could produce hundreds of megawatts of power.

Now, I realize that talking about sending humans to Titan is a pretty far-out idea. And there are a lot of obstacles to overcome, not the least of which is learning how humans will accomplish the entire reproduction process in microgravity. Also, growing food on Titan using crops as we do here on Earth will not be efficient given the lower solar flux reaching Titan’s surface — and the already low efficiency of photosynthesis here on Earth. Humans on Titan will will need biotech and nontraditional foods. Perhaps future humans on Titan can invoke some type of artificial photosynthesis; maybe eat some hybrid algal food.

And before all of this, a big barrier is inertia in our government.

The 2014 National Academies report Pathways to Exploration, which discusses rationales and approaches for a U.S. human space exploration program, points out that “in the view of many observers, the human spaceflight program conducted by the U.S. government today has no strong direction,” namely because pronouncements by several presidents about various space ventures (moon, Mars, asteroids) have not been matched to the commitment accompanying President Kennedy’s 1961 direction to go the moon. A progressive human spaceflight program (to Titan, or anywhere) funded by a budget that barely keeps pace with inflation is simply not sustainable.

So if we want humans to go farther than Low Earth Orbit, that’s a big hurdle to jump. In addition, there’s the issue of getting humans to Titan in a timely manner. It took the Cassini spacecraft seven years to reach Saturn; if a human journey to Titan took seven years, the astronauts would likely succumb to radiation- and microgravity-related health issues (not to mention psychological problems). Thus, at the top of the technology needs list for our Titan settlement is propulsion — we need a way to get humans to Titan in under a year.

There are policy, budgetary and technological challenges to overcome in moving humans out of LEO. That said, the Pathways to Exploration report further points out that NASA’s “horizon goal” is a human surface landingon Mars. And, while a worthy goal, I wonder: What then? After landing humans on Mars, what will be our next goal — living underground on Mars?

Here’s an idea: Let’s make our “horizon goal” the establishment of a self-sustaining human settlement on Titan, with a human surface landing on Mars a milestone on the path to our long-term destination.

Another confession: I’m a bit of an optimist.

Amanda Hendrix is a senior scientist at the Planetary Science Institute and co-author of Beyond Earth: Our Path to a New Home in the Planets, with Charles Wohlforth.

Confession Of A Planetary Scientist: ‘I Do Not Want To Live On Mars’