Two of the mysterious globular structures were spotted in the galaxy NGC 3079, located 67 million light years from Earth, according to a new study published in The Astrophysical Journal, led by University of Michigan astronomer Jiangtao Li.

The “bubbles,” which are made of high-energy particles, stretch out across 4,900 light years on one side of the galaxy, and 3,600 light years on the other. To put that into perspective, the Sun’s influence extends for about two light years, so these superbubbles are around 2,000 times longer, on average, than our solar system.

Astronomers aren’t sure what is blowing out the superbubbles, but it must be an extremely forceful process. The extreme properties suggest that they are produced by cataclysmic events like starbirth, or jets emitted from the galaxy’s central supermassive black hole. The structures may also be a source of cosmic rays, which are high-energy particles that originate outside the solar system and constantly hit Earth’s atmosphere. 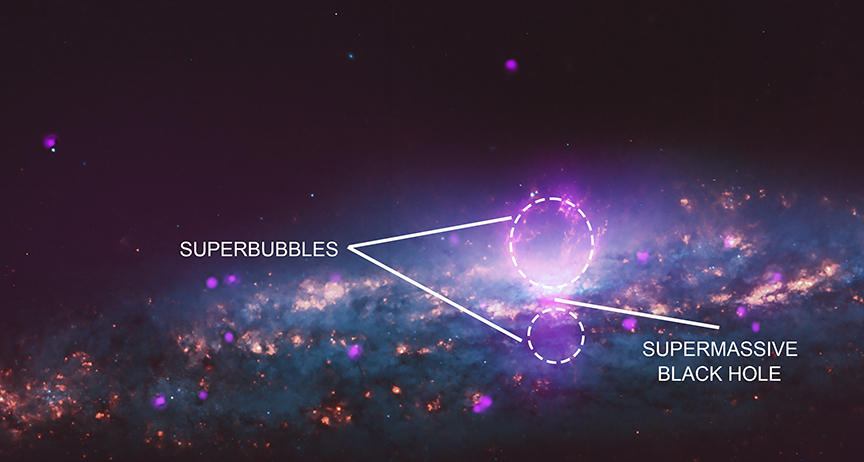 The new research compiles spectacular images of the superbubbles in optical, X-ray, and radio light. The visuals were captured by NASA’s Chandra X-ray Observatory over the course of four observational periods. The earliest images were taken way back in 2001 and 2006, and the last two were produced in 2018.

This superbubble phenomena is rarely observed in the universe, but it is not totally unique to NGC 3079. Our own Milky Way galaxy has its own super-sized version of these structures, known as “Fermi bubbles.”

These energetic balloons stretch out over a total of 50,000 light years on either side of our galaxy’s supermassive black hole, which is called Sagittarius A*. Astronomers think they were formed when a large mass, such as a gas cloud, was partially ingested by Sagittarius A*. Some portion of the object subsequently got belched out as high-energy jets, sculpted by the black hole’s magnetic field.

A similar sequence of cosmic consumption and regurgitation may be responsible for the NGC 3079 superbubbles. In fact, the NGC 3079 structures could help scientists contextualize the extraordinary dynamics that created the Fermi bubbles. Though they are smaller and likely younger than the Milky Way’s bubbles, the NGC 3079 bubbles are easier to observe in full because they are located at a distance from our galaxy.

Li and his colleagues hope that future observations will shed light on the processes that form the superbubbles, and whether they play a role in the abundance of cosmic rays speeding around the universe.

“Future deeper radio/X-ray observations, careful measurement, and modeling of the magnetic field, as well as theoretical modeling of the superbubble in different scenarios, will help […] to better understand the origin of galactic nuclear superbubbles,” the authors wrote in the study.

Get six of our favorite Motherboard stories every day by signing up for our newsletter.