It is believed that the Akashic records contain all the knowledge and experiences of our soul acting as a supercomputer of cosmic information where we can access information on our past lives, the present and future possibilities (forming part of the theory of reincarnation), as well as the sense of our existence.

Every moment, every test, every feeling and thought, everything would be manifested there.

But these records do not hold only information about the human soul, supposedly, the Akashic records would also possess the knowledge of the whole universe, from the beginning of life to the last future possibilities manifested from the microcosm and the macrocosm, since it is a complete universal memory. From a Theosophical and Anthroposophical point of view, we understand that the Akashic records are a summary of all human events, thoughts, words, emotions, and intent ever to have occurred in the past, present, or future: the perfect tool for a Prophet and Seer.

The idea that such a cosmic memory bank exists has fascinated scholars and philosophers since time immemorial.

Akasha or ākāśa is a term for either space or æther in traditional Indian cosmology.

In ancient Sanskrit, it is used to describe the ‘ether’ (æther), which is an impalpable, immaterial, subtle and intangible fluid, which the ancient Hindus believed exists across and ‘inside’ the entire universe and would be the vehicle of sound and life.

As noted by Crystal Links, in Surat Shabda Yoga cosmology, the Akashic Records would be located within the causal plane of Trikuti. Believers in the Akasha make many claims about how widely the Akasha was used, including:

In other words, we can define the Akashic Records as the ‘data’ that in theory exists in a single place, in a non-physical way, outside of time and space. The Akashic records can also be summed up as a kind of infinite memory (of everything that has happened since the beginning of time) that has become embedded and registered in the ether. 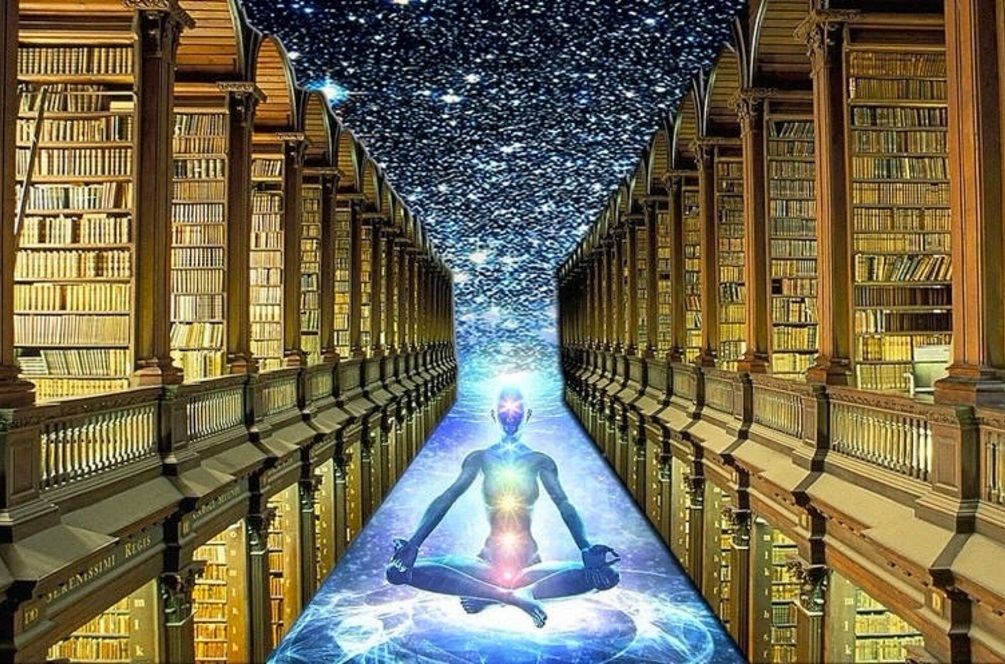 Tapping into the cosmic library

So, if such a library exists, is there a way we can access it? Tap into this information, passing all boundaries and discovering things we were perhaps better off not knowing?

If you think about the Akashic Records, and important people in history like Nostradamus, Edgar Cayce, and Baba Vanga, you can’t help and wonder whether they may have something in common.

If the Akashic records contain all the knowledge and history of the whole universe, from the beginning of life to the last future possibilities manifested from the microcosm and the macrocosm, then accessing this cosmic library means that he who access it would have infinite information available to him.

If everything that has happened, that is happening and that is yet to happen is located within this supposed cosmic library, then accessing it would mean that person would know of future events that are yet to happen.

He or she would become a seer. A Prophet. A person who has access to information others do not.

In 1555 in France, Michel de Nôtre-Dame, aka Nostradamus. began to write a series of mysterious verses, full of strange ideas, strange information. It is claimed that these were astonishing predictions of future events on Earth. Through his work, it is believed that Nostradamus managed to predict cataclysms and disasters hundreds of years before they happened.

Furthermore, it is also claimed that Nostradamus predicted the entire world history since his death up to now, and well beyond.

The French Physician and apothecary is credited with having predicted the Great Chicago Fire of 1871 and the rise of Hitler in the 1930’s. He also predicted Sept. 11, 2001, when he wrote: Earthshaking fire from the center of the Earth Will cause tremors around the New City. Two great rocks will war for a long time; Then Arethusa will redden a new river.

The man is also credited for predicting the Moon Landing, the assassination of J.F.K., and the nuclear bomb.

So how did he do it? Were his predictions the result of poems and personal writings that have wrongly been interpreted?

Or, is it possible, as some authors suggest, that Nostradamus did, in fact, manage to predict the future? And he did so by tapping into a mysterious cosmic energy: The Akashic Records.

Called by many as the sleeping prophet, Edgar Cayce has remained as one of the most popular seers despite the fact that not many know of his work.

Cayce is responsible for many prophecies which are already fulfilled today, as the Second World War, or the death of several presidents, including Kennedy.

He devoted his life to research topics related to the embodiment, clairvoyance, UFOs, Atlantis, spirituality, and healing, among many others.

Just as Nostradamus, he seemed to have had the incredible gift of seeing things that are yet to happen, many years into the future. He announced the awakening of one or both volcanoes Vesuvius and Etna.

In 1934, he predicted that the majority of Japanese territory would slide into the sea. Curiously, Japanese geologist Nobichico Obara argues that Japan is constantly sinking into the sea, two to three centimeters per year.

So how did he do it? Is it possible that just as Nostradamus, Cayce too managed to access the Akashic Records?

In “The Law of One, Book 1,” Edgar Cayce is asked how he receives his information. The answer received from “Ra”.

Baba Vanga and her incredible prophecies

Just as Nostradamus and Cayce, Baba Vanga, a blind mystic from Bulgaria, predicted incredible things from the future.

The Bulgarian is referred to by many authors as the Nostradamus of the 21st century. Somehow, she managed to predict the 9/11 terror attacks, the 2004 Boxing Day tsunami, and she also warned the world about the rise of the terrorist group ISIS, decades ago.

She also managed to predict the tragic fate of the Russian Submarine the Kursk in 2000;

“At the turn of the century, in August of 1999 or 2000, Kursk will be covered with water, and the whole world will be weeping over it.”